For children ages one through age six. Remember that each child develops at his/her own pace and the information below is for informational purposes only. You are your child’s best advocate and know your child best. Let your pediatrician know if you have concerns about your child’s development.

DEVELOPMENTAL MILESTONES
By the age of one

Between one and two 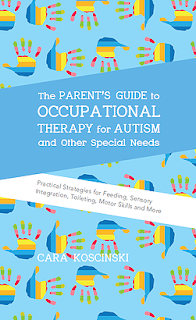 AWARD-WINNING book for new OT grads, parents, and others. All of the most frequently asked questions pediatric OTs receive. Handwriting, daily living (haircuts, baths, and dressing), toileting, behaviors and SO much more!

Between two and three Between three and four Between four and five

Between five and six

Fine Motor – incorporates the small muscles such as handwriting

NEW!! I found some FREE awesome handouts on development from the Centers for Disease Control.  Here’s the link to the website.    https://www.cdc.gov/ncbddd/actearly/milestones/index.html

There’s even an app that lets you track your child’s milestones. So cool! What Are Pre Writing Skills?

What are pre-writing skills and why does my child need them?Babies are born with hands that are curled up and ...
Read More OT is BOOMING! We are in demand and are showing our unique value.  Occupational therapy is growing by leaps and bounds ...
Read More

Fourth of July Tips for Kids

Summer is in full force and we have tips for kids who may struggle with sensory processing.  The 4th of July ...
Read More Tuesday’s TOY of the Week – Tweezers

Cool TWEEZERs are Tuesday's TOY of the Week! Fine motor skills are important, but we cannot start to practice cutting until ...
Read More Welcome! I'm a pediatric OT and mom to sons with special needs. My products and courses are fun and engaging. How can I help you?
Read More Great to have you here!

I have a special gift for you!

Enter your email for your free copy of Sensory Tips!

You have Successfully Subscribed!